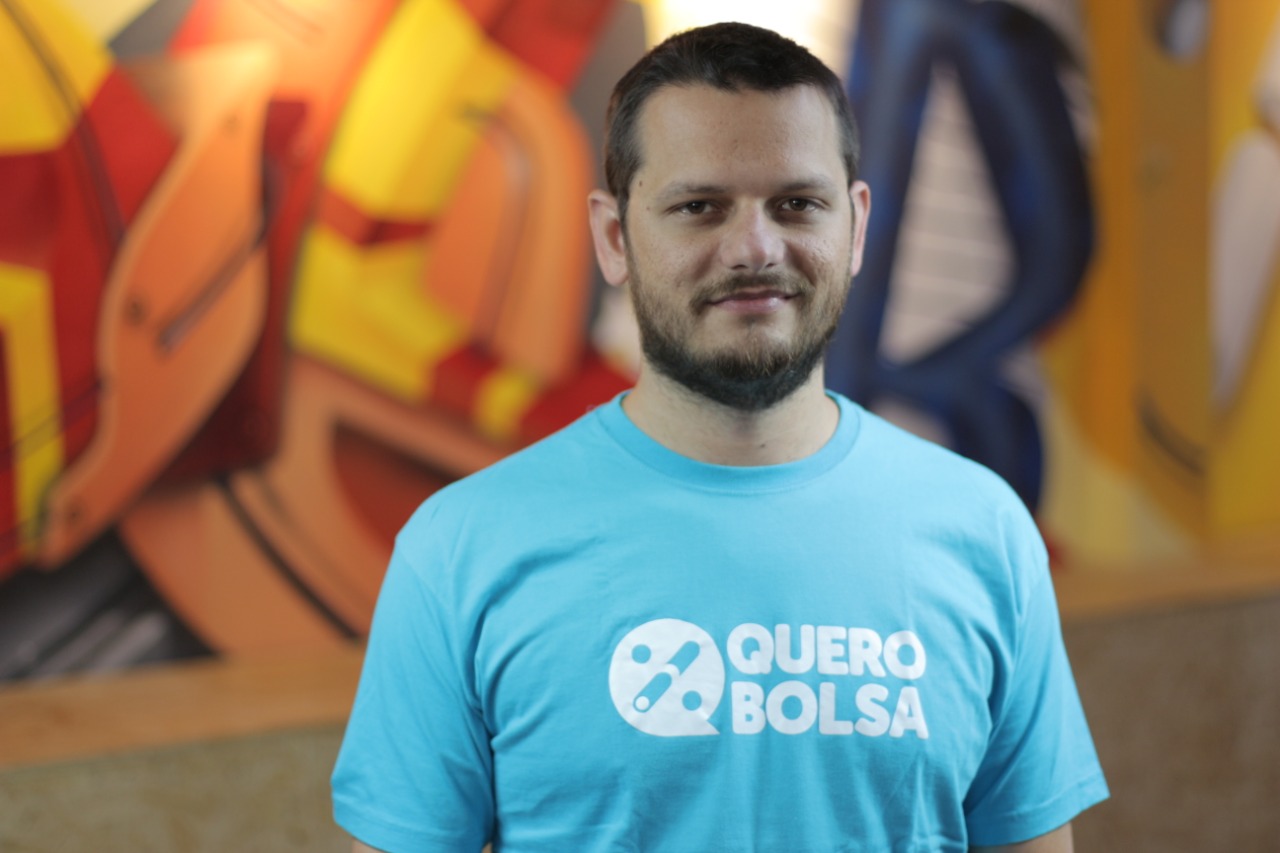 Quero Educação was Iporanga's first investment, which became one of the largest Brazilian EdTech companies since it received an investment in 2011. Today, this company that is specialized in connecting young people to scholarship opportunities in private higher education offers a range of services, from an online entrance exam to tuition management.

Currently, around 8% of private higher education students in Brazil have enrolled thanks to Quero - there were 875,000 students, and the plan is to reach 1 million this year. "Quero is increasingly positioning itself as a partner for students to understand the best educational journey for them, with the best return per real invested. This is what we've always been looking for: Quero's mission is to bring education to more people, helping them to choose and enter the right course, at a price they can afford," says André Narciso, CEO of the startup.

Read the full interview to learn more about Quero's trajectory so far and the company's next steps:

How did Quero start?

Quero was initially founded to be a college alumni social network. At the time, LinkedIn was not so popular, and so Bernardo de Pádua, who graduated from ITA (Technological Institute of Aeronautics), created a platform for the institute, the ITA-Alumni, which was later named RedeAlumni, to extend the other universities.

But that plan didn't work out. Although the product was good and people liked using it, it wasn't easy to monetize. Typically, in business meetings with university managers, everyone praised the product, but in the end, they always asked if there was something to attract students. That's when we realized what the real pain of educational institutions was. In 2010, the product was pivoted to a student acquisition platform called Captavest, in a "member get member" model. It was a white-label platform through which an enrolled student got a discount to bring other students.

In 2011, the founders of Quero met Guilherme Assis, even before Iporanga existed, in an angel investment round of the startup, and, in the following year, we launched Quero Bolsa, which was our growth engine. We moved to a B2B2C model through a marketplace, which is something more viral, and then it started to work out really well.

How did you stand out at that time?

One of the things we were very proud of was knowing how to work SEO properly at a time when nobody knew how to do it. The product began to grow rapidly, and in 2013 we reached breakeven, earning BRL 1 million. I joined the company in the following year as CFO when we started raising a Seed Round to build a stronger team. Iporanga led this round and, since then, growth has been faster.

A lot has changed, we must always be evolving, but the monetization model is something that has changed a lot. Back then, we first tried to create a free marketplace for the student and charge the college per tuition, an interesting model, but one that added a great deal of complexity to the commercial agreements with the colleges. Afterward, we started offering a discount to the student, and they paid us directly via the benefit. Then, we evolved to a model of exemption of the first tuition fee to make the student even less expensive - this was our main model for a long time. We are now testing new things, such as charging universities in exchange for additional services, such as sponsored offers, student tuition charges, and even use of shared educational centers.

What other rounds have you done since then?

After this 2014 Seed Round, we had the opportunity to participate in Y Combinator's Acceleration Program in 2016. We weren't the typical company accepted by the accelerator, which usually picks up early-stage startups. We were already making a profit at that time, and we had 100 employees on the payroll. Still, it was nice to participate in the program to have access to people abroad.

In 2018, we did our Series A, also led by Iporanga, which was there in our first round Anjo, our Seed and in this third stage. Some funds followed the investment, we had the follow-on of Y Combinator and the entry of Endeavor Catalyst and Omidyar. Throughout this process, we always like to take advantage of opportunities to bring interesting people close, such as Geoff Ralston, John Katzman, Micky Malka, Henrique Dubugras, Florian Hagenbuch, among others. We are now planning the next steps, probably a Series B soon.

In terms of product, what else have you developed since Quero Bolsa?

A lot. In the higher education's world, we always see that the marketplace is based on three fundamental pillars: price, information and convenience. We've always had the price, and we've continually developed the other two.

Currently, our marketplace is already an unparalleled source of information for students, but we are never satisfied, and we continue to invest in order to offer more and more information in a simple and structured way. In this effort, we created the Quero Bolsa magazine, one of the largest online magazines specialized in education, with around 3 million sessions per month. We also created a review system for students themselves: who enrolls evaluates their own college on our platform. We also continued the work started by Guia do Estudante ranking in the Estadão Quero's College Guide. With this, we were able to provide students with college assessments from three different angles: from the students; from peer-to-peer, in which teachers assess teachers; and from the MEC's (Ministry of Education) grade.

In terms of convenience, we've developed a lot of technology. We were the first players to make college admissions 100% online, an innovation that ended up being widely adopted due to the pandemic, but which we had already been doing for two years. We also virtualized the entrance exam itself, creating the Nota Quero, or PENEM, a private version of Enem (Students' Performance Exam).

We are still starting to get into financial services. We have a product to charge students' tuition fees, which is also done online, reducing queues at the institutions' offices and red tape. We also created an installment product to manage the colleges' student financing programs, with transaction management, risk assessment etc.

Now, could you talk briefly about the latest release?

We debuted distance learning centers, as we saw that, even though the distance learning product is mostly virtual, the MEC requires that, in order to offer the option in a city, the college needs to provide a center. This made the game very difficult for smaller colleges, with little scale, and caused the distance learning market to be even more concentrated than in the on-site market. Smaller colleges do not have enough students to pay the fixed costs of a center in cities far from their headquarters, so they are unable to expand. We decided to give opportunities to small institutions by offering these shared centers, which has been very nice and well accepted by the colleges, in addition to being very aligned with our mission, increasing the offer of choice for students.

What moves have you made towards mergers and acquisitions?

In late 2019, we had the opportunity to purchase the operations in Brazil of QuinStreet, an American inbound marketing company focused on various sectors in the US, including education and financial services. We bought the education operation here in Brazil, and it became our inbound arm. Basically, it's when we do a marketing operation on behalf of the college, more actively. We take on the entire marketing funnel, from the creation of articles, investment in performance marketing such as Google and Facebook, hiring affiliates, to the call center operation, to deliver to the colleges not a lead but an enrolled student.

In addition, in basic education, in 2016, we got to know a company called Melhor Escola, at the time a school evaluation site called K-12 (from kindergarten to 12th grade). The company was very nice, with a great team, but they didn't have a good sustainable monetization model, so we made an investment, and they adjusted the business model to be equal to Quero Bolsa. In 2018, we did a second round and, in 2019, we brought it into the group with a merger.

How has the pandemic affected Quero?

Overall, the mainstream education market was hit hard. But we are recovering quickly. The Melhor Escola, for example, has a growth rate varying from two to three times what was the pre-pandemic, it is growing well. At Quero, our in-person funding suffered a lot, but we are compensating with other initiatives, such as the centers, for example. The expectation is that, in the summer, we will resume pre-pandemic growth. We are now looking for more appropriate business models for distance learning, testing new monetization models, and finding very strong growth levers.

What do you see in the short term for Quero?

In the short term, some levers are accelerating our growth, such as the case of K12 and the centers. These growth levers should be further boosted by the end of the pandemic and the return to attendance. In this context, precisely to ensure that we will have the necessary conditions to enjoy this growth, we are evaluating the possibility of a Series B in the short term.

And in the long run?

There is still a lot of work to be done in higher education and K-12 in Brazil. But over the long term, we believe in an even greater opportunity that we are well-positioned to embrace. Education is changing, and nobody knows exactly where it will end up, but we are convinced that the student will increasingly look for courses of shorter duration and faster return to their career. We don't know what this game will be like going forward, but Quero is increasingly positioning itself as the student's partner to help them plan their educational journey, ensuring the best return per dollar invested and reconciling the need for a quick return and an agile course, with the benefits of a solid education within a coherent educational journey. This is what we've always been looking for: Quero's mission is to bring education to more people, helping them to choose and enter the right course at a price they can afford. Given the reach of our websites and the impartiality of our business models, I believe that the answer to what education will be in the future in Brazil is Quero.

Why gaming is this such a huge opportunity? We asked Santiago Gonzalez, founder of Prota Games

The gaming industry is the biggest entertainment market in the world: bigger than the music and film industries combined. In 2019 ...

In our new post, Leo and Renato talk about how they met, how they operate, and give a perspective of the technology and investment...